Upgrade to
SharpCap Pro
only £12 a year

Perhaps late June was the wrong time of year to finally fulfill my boyhood dream of buying a telescope. Certainly the fact that it doesn’t get dark until 11pm isn’t a good start for observing when you get up early anyway, then the weather has hardly been helpful…

So to keep myself from getting bored through the long, light, evenings of summer I started wondering whether you could computer control the SupaTrak mount – after all, it looks just like the Celestron SLT mount and Celestron are owned by Synta *and* engineers love to re-use things that work. I found a bunch of very interesting information at Matthias Bopp’s site (here, look in the Astro Downloads section), particularly on how the Nexstar mounts worked and the handset communications protocol worked.

In actual fact, I found out that nothing is quite the same as the Nexstar mount – the pinout on the handset cable is different, the communications protocol is different and the TTL to RS232 circuit based on a couple of transistors didn’t work with any of my serial ports, but all of those problems can be overcome.

Inside the SupaTrak Mount

The mount contains two motor assemblies (altitude and azimuth) and a motor controller circuit board. The main ICs on the circuit board are a pair of PIC16F78 microprocessors (one controlling each axis). The black cable running out of the image on the bottom right goes to the data and power sockets on the mount cover. 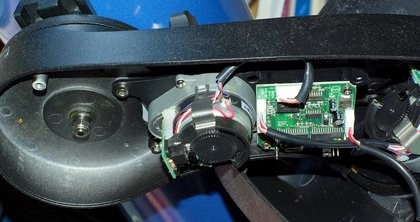 The handset contains a single PIC16F73 microprocessor which monitors the button presses and sends commands to the mount. 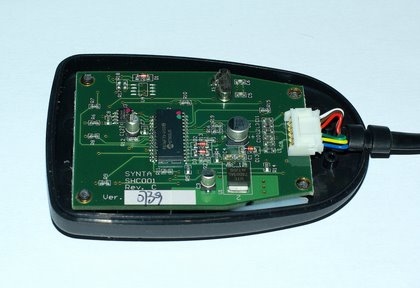 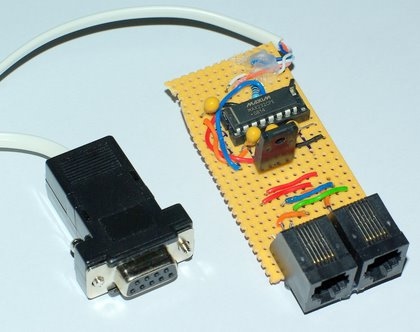 Here’s the circuit I put together to interface from the scope handset<->mount wiring to RS232. It’s not really a neat solution to the problem as it evolved gradually as I learnt more about how the system worked. The 2 RJ12 sockets at the front are wired in parallel, so you can plug the handset into one and an RJ12-RJ12 crossover cable between the other and the mount. This setup allowed me to snoop on the handset<->mount communications, but isn’t necessary for simple computer control.

Building a system using RJ12 sockets allows you to avoid modifying your mount or handcontroller in any way, unfortunately it adds to the cost of the project – the only UK supplier I could find for the sockets and the appropriate cable is Farnell who have a minimum order value of £20 + VAT. Additionally you need RJ12 (6P6C plugs, which are more widely available and an appropriate crimp tool (or a good deal of patience to manually crimp the plugs onto the cable. It’s also worth noting that the pins of the RJ12 sockets are on a 1/20th inch spacing, so don’t work nicely with prototyping board. I ended up bending up alternate pins to sit above the board (not visible in the picture above). 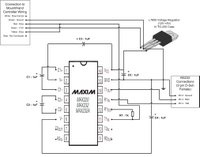 Here is a schematic diagram for the interface circuit (click to see it full size). I have drawn this from my own circuit and cross checked against the wiring list given in the PDF instructions, but I would still advise implementors to check that the schematic and the wiring list match up as they work (just in case I have missed something). Note that I forgot to put capacitor C5 on my circuit with no apparent ill effects.

How To Connect To The Mount/Handset Wiring

I chose to wire two RJ12 sockets in parallel and create an RJ12 crossover cable – the crossover cable is run between any one of the sockets and the mount, and the handset plugged into the other socket. In this way I haven’t had to physically modify either my handset or mount, but it is perhaps the most expensive way to connect up – you need RJ12 plugs and sockets, a crimping tool and suitable 6 way flat cable – smaller suppliers won’t stock all of these.

I would suggest the following possible alternatives:

The communications between the mount and the handset is a bit odd – using 2 wires for power (+12V and ground) and 2 for data. One of the data wires is bidirectional signal (half duplex, 9600 baud 8N1), while the other is flow control. I presume that the sending component pulls the flow control wire low to indicate that they are sending and the other component will not send until it is released again. I didn’t bother wiring up a connection to the flow control line in my final circuit, since PC<->mount communications seem to work well without it.

I’ve written up a lot more detailed information about the scope/handset communications and how to interface to it – you can find it in this document :  SupaTrakMountHacking.pdf

Erratum to Communications ProtocolI clearly haven’t got a full understanding of the ratio parameter of the ‘G’ command – in my original tests it seemed that a goto command used a value of 4 for this parameter, but later tests showed a 0 being sent. There is also what looks like a bug and workaround related to this in the handset/mount communications. After a goto command over a fairly long distance (which uses the top motor speed), movement commands for intermediate speeds (i.e. 32x sidereal in normal ratio) are misinterpreted by the mount which moves about 10x faster than expected. The only workaround for this I have found so far is to query the axis for its sidereal rate (D), start it moving (L, I, G, J), stop it again (L) and repeat. Maybe if I understood the G command better, this would make sense.

I have written an ASCOM driver for the mount, which now seems to work at least to some degree. Read more about it here. The source code is also available for those who want to play or who run systems that don’t support ASCOM.

I have no connection with SkyWatcher, Synta or any of the other companies mentioned here. All the information has been discovered by my own experimentation. I haven’t managed to damage my mount or handset while doing this experimentation, but that doesn’t mean that yours is guarenteed safe. In particular if you mess up the interface circuit, you could damage something.

All software, circuit diagrams and other information provided here comes with no warranty, either express or implied of suitability for any purpose. The author disclaims all liability of any kind for any damage caused by the use of this information. If you break something, you get to keep both halves…